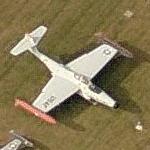 By kjfitz @ 2010-11-24 15:03:52
@ 44.47708074, -73.15216741
Burlington, Vermont (VT), US
The Northrop F-89 Scorpion was an early American jet-powered fighter designed from the outset as an all-weather interceptor. Though its straight wings limited its performance, it was among the first USAF jet fighters equipped to fire guided missiles, including the distinction of being the first combat aircraft armed with nuclear weapons (the unguided Genie rocket) for air-to-air use.
Links: en.wikipedia.org
827 views