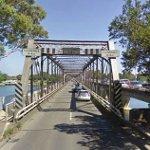 By WacoKidd110 @ 2012-07-10 11:20:38
@ -34.862347, 150.60126
Bomaderry, Australia (AU)
The Nowra Bridge joins the main area of Nowra to North Nowra and Bomaderry. It carries the Princes Highway over the Shoalhaven River and was originally intended to carry a double railway track. The railway, however, was never extended past Bomaderry station where trains still terminate today. The bridge was designed by American engineer C Shaler Smith and is considered to be of historical significance. [1] It is shadowed by a newer, concrete bridge built to support increased traffic flows in the area.

The bridge was completed in 1881 and is built from cast iron and steel. It was originally decked with timber but this was replaced by concrete in 1981. Its full length is 342 m.[
Links: en.wikipedia.org
736 views