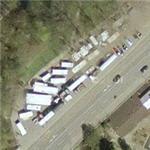 By kjfitz @ 2009-08-19 10:53:02
@ 46.953706, 7.444393
Bern, Switzerland (CH)
During the European football championships the Känzli car park in the Lorraine district of Bern became an official sex zone. Prostitutes were able to offer services from caravans parked there. Some of the locals protested, but the authorities said bringing it out in the open was the best way to keep prostitution in check.
Links: www.youtube.com
3,621 views