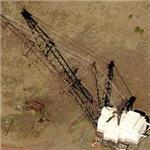 By kjfitz @ 2008-05-01 11:22:44
@ 33.634928, -87.009601
Graysville, Alabama (AL), US
Dragline excavation systems are heavy equipment used in civil engineering and surface mining. In civil engineering the smaller types are used for road and port construction. The larger types are used in strip-mining operations to move overburden above coal, and for tar-sand mining. Draglines are amongst the largest mobile equipment (not water-borne), and weigh in the vicinity of 2000 metric tonnes, though specimens weighing up to 13,000 metric tonnes have also been constructed.

A dragline bucket system consists of a large bucket which is suspended from a boom (a large truss-like structure) with wire ropes. The bucket is maneuvered by means of a number of ropes and chains. The hoistrope, powered by large diesel or electric motors, supports the bucket and hoist-coupler assembly from the boom. The dragrope is used to draw the bucket assembly horizontally. By skillful maneuver of the hoist and the dragropes the bucket is controlled for various operations.
Links: en.wikipedia.org
5,425 views