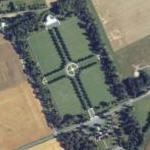 Included among the soldiers here who lost their lives is poet Joyce Kilmer.
Links: en.wikipedia.org
502 views