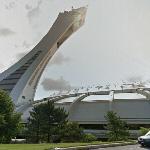 By daggerwell @ 2013-04-10 08:54:41
@ 45.55822, -73.554228
Montréal, Canada (CA)
"The Olympic Stadium is a multi-purpose stadium in the Hochelaga-Maisonneuve district of Montreal, Quebec, Canada built as the main venue for the 1976 Summer Olympics. The stadium is nicknamed 'The Big O', a reference to both its name and to the doughnut-shape of the permanent component of the stadium's roof; 'The Big Owe' name has also been used to reference the astronomical cost of the stadium and the 1976 Olympics as a whole
http://virtualglobetrotting.com/map/olympic-stadium-montreal/
Links: en.wikipedia.org
592 views