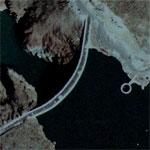 By jbottero @ 2013-01-13 13:37:57
@ 43.642372, -117.242864
Halfway, Oregon (OR), US
Owyhee Dam is a concrete arch-gravity dam on the Owyhee River in Eastern Oregon near Adrian, Oregon, United States. Completed in 1932 during the Great Depression, the dam generates electricity and provides irrigation water for several irrigation districts in Oregon and neighboring Idaho. At the time of completion, it was the tallest dam of its type in the world (it was surpassed about two years later). The dam is part of the Owyhee Dam Historic District, which is listed on the National Register of Historic Places.
Links: en.wikipedia.org
291 views