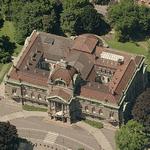 By adrbr @ 2008-03-02 16:27:15
@ 48.587685, 7.752257
Strasbourg, France (FR)
The Palais du Rhin ,former Kaiserpalast (Imperial palace), is a building situated in the German section (north-east) of Strasbourg, dominating the Place de la République (the former Kaiserplatz) with its massive dome. A huge building in itself, it constitutes, with the ample gardens that surround it as well as the stables next to it, one of the largest fully preserved landmarks of 19th century Prussian architecture.
Links: www.archi-wiki.org
771 views