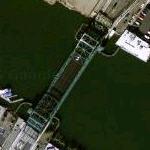 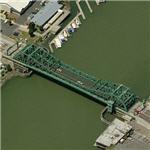 The present bridge was designed by the County of Alameda Surveyors Office and constructed under the Federal WPA Program. it was opened in 1935 with a Grand Opening celebration that included a public wedding of a man from Oakland and woman from Alameda to symbolize the unity of the two cities with the building of the bridge.

The Park Street Bridge is the main thoroughfare into downtown Alameda and averages almost 40,000 vehicles a day. Park Street is a double leaf bascule bridge in which each leaf can be operated independently. The bridge employees a steel superstructure that utilizes steel channels with cross lacing and rivets.

Each leaf of the Park Street Bridge has its own machinery room with 75 HP, 3 phase, 480 volt electric main drive motors and an auxiliary drive system which includes multiple gear reductions similar in design to a manual automobile transmission, only many times larger without housing.

Power to the bridge is supplied by the Bureau of Electricity (City of Alameda), backup power is supplied by PG&E. A 75 hp main motor and a 5 hp backup motor provide the muscle to raise the bridge. Park Street is stopped by two service brakes and two hydraulic brakes. The service brakes are used to stop the bridge in normal operating conditions. The hydraulic brakes are used for emergency stopping power.

Park Street is the only bridge operated by the County that has two complete operator towers. The Alameda Tower is the main operational tower and can operate both leafs under normal or emergency power. The Oakland Tower can only operate the Oakland leaf under normal or emergency drive. The dual tower system has been put to good use during the current renovation of the Park Street Bridge. The bridge had an electrical update in the 1960's which was an improvement over the early 1930's technology.

Each leaf of the bridge can open to a 78 degree position, this is considered a full opening. A normal opening is 70 degrees and can accommodate 95% of vessel traffic. With a full opening the bridge can accommodate almost any vessel. The main limiting factor would be vessel width and the depth of the channel. Each leaf of the bridge is 120 feet in length. Massive counterweights which are out of view helps balance the bridge leafs when opening.
Links: www.acgov.org
2,194 views