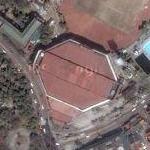 By kjfitz @ 2010-01-02 11:28:11
@ 14.5775, 121.066111
Pasig City, Philippines (PH)
The Philippine Institute of Sports Arena or PhilSports Arena is an indoor sporting arena located inside the PhilSports Complex in Pasig City, Philippines. It was formerly known as the University of Life Training and Recreational Arena or the ULTRA. The arena and its surrounding sports complex are maintained by the Philippine Sports Commission. It was the site of the majority of the games of the Philippine Basketball Association from 1985 to 1992 and 1999 to 2002. The league still occasionally comes back to play at the arena.

The football arena adjacent it was the site of the PhilSports Stadium stampede on February 4, 2006. When Typhoon Ketsana and Typhoon Parma set foot in the Philippines, some evacuees took shelter in the arena.
Links: en.wikipedia.org
1,860 views