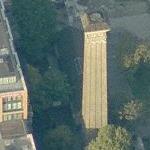 The new sewers which ran from West to East London, were designed to operate by gravity. However this meant that by the time sewage had reached the East End, it was over 13 metres underground. So, to transfer the millions of gallons of Londoners’ waste back up to the surface, steam-powered pumping stations were built at Crossness and Greenwich south of the river and at Western (Pimlico) and Abbey Mills (Stratford) to the north.
Links: commons.wikimedia.org
6,934 views