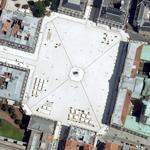 By dda @ 2007-03-11 04:52:29
@ 48.693735, 6.183203
Nancy, France (FR)
The square was a major project in urban planning imagined by Stanisław Leszczyński, Duke of Lorraine and former King of Poland, as a way to link the medieval old town of Nancy and the new town built under Charles III in the seventeenth century. The square would also be a place royale to honor his brother-in-law, Louis XV of France. The design linked two handsome buildings that already existed, the Hôtel de Ville, now centered on its grand square, and the Hôtel du Gouvernement. The seat of city government and the seat of ducal government[1] faced one another as complements through a series of rational, symmetrical, yet varied urban spaces unequalled in Europe at the time.