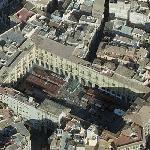 By Mike1989 @ 2013-05-26 07:31:11
@ 39.57165877, 2.65178963
Palma, Spain (ES)
The Plaza Mayor is the center of the city. The square has many shops, bars, cafeterias, restaurants and hotels. The main streets of San Miguel, Colon and Sindicato emanate from this plaza. The plaza occupies the space where the old Convent of San Felipe Neri was located. The plaza was also the site of the Inquisition until 1823. The plaza has a rectangular shape and the perimeter is arcaded, with buildings of three or four floors on the periphery. Some of these buildings are quite old. There is an underground parking beneath the plaza. The area is supposed to be the artist’s quarter and there are many street performers who frequent the place. The Plaza Mayor is one of the best sights of the city.