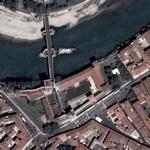 By DonMartini @ 2006-05-05 05:52:36
@ 45.439937, 10.988528
Verona, Italy (IT)
Ponte Scaligero which spans Riva ( river ) Adige, was built about 650 years ago as a private bridge for the ultra powerful and wealthy Scaligeri ( Scala ) family. The bridge provided direct access to the family fortress of Castelvecchio ( part of which is shown in the background of this photo ), which was under construction at the same time. The pedestrians only bridge has long since been open to the public. Views of Castelvecchio and of the river are excellent from the bridge. Children enjoy walking along the elevated parapets which run the length of the bridge on both sides. Guards patrolled from the parapets while members of the Scala family passed safely on the main part of the bridge. Needless to say the Scala family had many ememies. Ponte Scaligero looks like an extension of Castelvecchio. It is almost as heavily fortified as the castle. Numerous attacks against the Scala family were launched from Riva Adige. The concave "V" shape pattern along the castle and bridge ramparts is very characteristic of 13th / 14th century architecture in throughout the Veneto and Alto Adage regions of Italia.
897 views