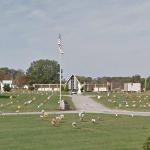 In life, he was romanticized by many as the last of a breed of traditional mountain men and a maker of marvelous moonshine. He was also reviled by some, who saw him as anything but an Appalachian icon.

But in death, he received what might be called a benediction, which is not so bad for a fellow who made a living most of his life in a kind of cultural no-man's-land on the other side of the judicial establishment.

In a rural, fall setting Saturday, about 350 people gathered at the Resthaven Memorial Gardens outside Dandridge to pay tribute to Sutton, 62.

Country music star Hank Williams Jr. flew in from Nashville to attend the service in the mausoleum/chapel, which was filled and lined two to three deep on both sides of the pews.
Links: archive.knoxnews.com
3,987 views