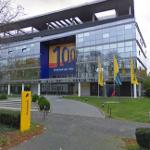 In 2007, the annual revenue was 8.2 billion euros.
Links: virtualglobetrotting.com
542 views