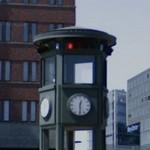 By Dania @ 2010-11-22 18:55:36
@ 52.509262, 13.376587
Berlin, Germany (DE)
Although a contraption at Stephansplatz in Hamburg is now thought to have predated them by two years, it has often been stated that the first traffic lights in Continental Europe were erected at Potsdamer Platz on 20 October 1924, in an attempt to control the sheer volume of traffic passing through. This traffic had grown to extraordinary levels. Even in 1900, more than 100,000 people, 20,000 cars, horse-drawn vehicles and handcarts, plus many thousands of bicycles, passed through the platz daily.

By the 1920s the number of cars had soared to 60,000. The trams added greatly to this. The first four lines had appeared in 1880, rising to 13 by 1897, all horse-drawn, but after electrification between 1898 and 1902 the number of lines had soared to 35 by 1908 and ultimately reached 40, carrying between them 600 trams every hour, day and night. Services were run by a large number of companies, but in 1929 all these were unified into the Berliner Verkehrsbetriebe (Berlin Transport Services) company, which has operated Berlin’s trams ever since.

Up to 11 policemen at a time had tried to control all this traffic, many of them standing on small wooden platforms positioned in key locations around the platz, but with varying success. The traffic lights, again from Siemens, were mounted on a five-sided 8.5 m high tower designed by Jean Kramer, shipped over from the United States, and actually modelled on a similar one erected on Fifth Avenue in New York in 1922, although towers like this had been a feature of the Big Apple since 1918. A solitary policeman sat in a small cabin at the top of the tower and switched the lights around manually, until they were eventually automated in 1926. Yet some officers still remained on the ground in case people did not pay any attention to the lights. The tower remained until c.1936, when it was removed to allow for excavations for the new S-Bahn line (on 26 September 1997, a replica of the tower was erected, just for show, close to its original location by Siemens, to celebrate the company's 150th anniversary. The replica was moved again on 29 September 2000, to the place where it stands today).
Links: en.wikipedia.org
964 views