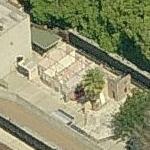 Practical Combat Range at the Tactical Training Center. This is a small “Hogan’s Alley” – type facility (a name which comes from the FBI’s training town in Virginia), with a number of alleys and corridors that terminate at fixed and moving targets. This is a live fire range, with a large bullet trap consisting of piles of shredded tires, faced by a painted rubber mat. It was improved and modified following the notorious 1999 North Hollywood shootout involving heavily armed and armored bank robbers that alarmed police with their firepower.

In the East view you can make out the new car-obstructions.
Links: www.clui.org
727 views