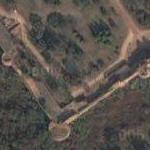 From the recent excavations near this fort, archaeological evidences such as pottery have been found which throws a new light on the existence of the city of Indraprastha at this place in Delhi, as mentioned in the great epic of Mahabharata. Sher Shah Suri built the fort and completed it in 1545. However, he soon lost it to the Mughal emperor Humayun, who made good use of the octagonal red sandstone tower known as 'Sher Mandal' as his library and observatory. It is rumored that Humayun slipped from the second storey steps and met his death here.
Links: golden-triangle.tajmahalindia.net
972 views