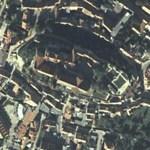 By DonMartini @ 2006-04-28 10:00:38
@ 51.785995, 11.137004
Quedlinburg, Germany (DE)
The protected part of Quedlinburg covers more than 80 hectares. UNESCO declared it to be an outstanding example of a European city of medieval origin which has preserved through the centuries its precious architectural heritage of romanesque and half-timbering buildings in exceptional quality. Quedlinburg was at the heart of the East Franconian Empire at the time of the Saxon dynasty of the Ottonians. It became a prosperous trading centre from its inception in the tenth century. The collegiate church of St. Servatius on a hill above the old town is a masterpiece, and it also houses a famous church treasure. In the nearby fields, the thousand-year-old Wiperti Church, and the remains of a Monastery of St. Mary on the neighbouring Münzenberg hill, still reflect the prestige that Quedlinburg enjoyed at a time when Germany was still at its beginning.

Quedlinburg`s intact medieval town layout exhibits more than eight centuries of authentic architecture in a way that is unique in both quality und quantity. Buildings of all styles and epochs make Quedlinburg the perfect place to study the development of half-timbering building-techniques and styles throughout the ages.

Founder of the Saxon Dynasty was King Henry I., elected and crowned in 919. Quedlinburg`s „castle-hill“ was his favorite seat of residence. Thus it was here that he was laid to rest after his death in 936. In that same year and on the same hill, his widow Mathilde established a ladies convent which was endowed by Henry`s successor, Otto I (the Great), with considerable wealth and influence throughout the realm. Quedlinburg remained a cultural and spiritual centre for centuries.

During much of the tenth and the first half of the eleventh centuries Quedlinburg continued to be the political centre of the Ottonian empire – it was here where the Saxon rulers regularly celebrated Easter and held some of their most important imperial diets. Around the castle hill, a thriving market-town developed, with connections to the major trading-routes of the time, supported by a prospering agrarian economy around it.

In December 1994, the old town of Quedlinburg and its castle hill, with the collegiate church were placed under the protection of UNESCO´s World Heritage Program.
Links: www.quedlinburg.de
631 views