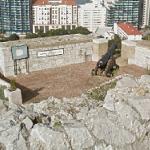 By Mike1989 @ 2012-12-18 06:12:44
@ 36.143971, -5.349413
Gibraltar, Gibraltar (GI)
The Moorish Castle is the name given to a Medieval fortification in Gibraltar, made up of various buildings, gates, fortified walls and its most dominant features, the Tower of Homage and the Gate House. Part of the castle itself also housed HM Prison of Gibraltar until it was relocated in 2010. The former is clearly visible to all visitors to Gibraltar, not only because of its striking construction but also because of its dominant and strategic position. Although sometimes compared to nearby alcazars in Spain, the Moorish Castle in Gibraltar was constructed by the Marinid dynasty, making it unique in the Iberian Peninsula.
Links: en.wikipedia.org
757 views