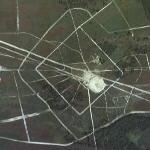 The first use for gunnery purposes was by the Wehrmacht in 1933, when the heaths to the east of the town of Nordhorn were used for artillery target practice. The RAF took over the range in 1945. During the Cold War, the daily flights over the town of Nordhorn were a constant reminder to the local townspeople of the ongoing struggle with the Soviets, despite the great distance to the border with Communist East Germany.

Despite the collapse of the Berlin Wall in 1989, the base remained as one of the few bases used by British forces in Germany. In 1995, as British forces were withdrawn from the rest of Germany, the Nordhorn aerodrome was expanded. However, in 1996, the Ministry of Defence decided to hand control of the base to the German government within a timeframe of six years. It was transferred back to the German Luftwaffe in March 2001. Despite being under German ownership, the RAF maintains a presence at the base.
Links: en.wikipedia.org
1,880 views