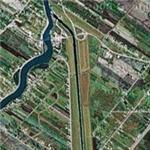 The Floodway was pejoratively nicknamed "Duff's Ditch" by opponents of its construction, after Premier Duff Roblin, whose Progressive Conservative government initiated the project. It was completed in time and under budget. Subsequent events have vindicated the plan. Used over 20 times in the 37 years from its completion to 2006, the Floodway has saved an estimated $10 billion (CAD) in flood damages. The "Duff's Ditch" term is still used affectionately.
Links: en.wikipedia.org
850 views