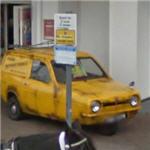 The Reliant Robin is a small three wheeled car formerly manufactured by the Reliant Motor Company in Tamworth, England. Being a three-wheeler with an official weight below 450 kg (992 lb), and, despite its size, the Robin can be driven by holders of a B1 category licence or car licence in the United Kingdom, can be registered and taxed at motorcycle rates, which gives considerable savings over a conventional car. The single wheel in the front steers, while the engine (also in the front) drives the rear axle.

The Robin was first manufactured in November 1973, and the final original Robin rolled off the production line in 1981. The vehicle was also produced under licence in Greece by MEBEA between 1974 and 1978. It was also manufactured in India by Sunrise Automotive Industries Limited as Badal.
Links: en.wikipedia.org
1,031 views

Beside that, the car isn't there anymore in SV.