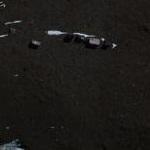 The concrete pillar erected by the First Polish Antarctic Expedition at Dobrowolski Station in January 1959 for gravity measurements, and the magnetic observatory at the station with plaque in memory of the opening of Oazis Station in 1956, are recognized as Antarctic Historic Sites. [2]

The Soviet Union became interested in the Bunger Hills again in the late 1980s, and built a new station - Oazis-2 - a few hundred metres to the west of Dobrowolski. The station was used for summer visits up to the mid-1990s.
Links: en.wikipedia.org
996 views