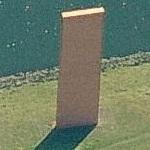 By pmoore66 @ 2011-07-31 04:22:05
@ 51.44934469, 6.72250074
Duisburg, Germany (DE)
Rhine Orange is the name of a built in 1992 in Duisburg-Neuenkamp sculpture at the mouth of the Ruhr and Rhine Rhine at 780th km It was produced by the Cologne sculptor Lutz Fritsch steel and forms a landmark. The estuary, the largest inland port in Europe, the city of Duisburg are an important location for the steel industry, technology, and as the site of the Lehmbruck Museum as a major museum for contemporary sculpture in Europe, linking all aspects of the Duisburg-economic and cultural life together.


The sculpture is 25 meters high and seven meters wide, three feet deep and weighs 83 tons. The cost of production amounted to about DM 400,000, which were initiated by the Junior Chamber of Commerce Niederrhein donated by businesses. The name of the Rhine Orange is a play on words. With the bright color is the color RAL 2004 Pure Orange =.


Orange is part of the Rhine Route of Industrial Heritage. Sculpture at the ends of the 230 km long Ruhrtalradweg and the "gate-tour de Ruhr", the longest ultra-marathon in Germany.
Links: www.guenter-pilger.de
591 views