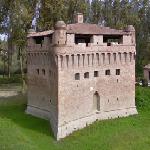 By Effi @ 2011-09-04 16:24:07
@ 44.950115, 11.422562
Stellata, Italy (IT)
The Rocca Possente was built around the year 1000 and was extended and reinforced by the Este family in 1362. Its important position on the River Po with that of the Rocca di Ficarolo on the opposite bank to which it was connected by a chain, meant control over navigation. It was almost completely destroyed in 1521 but was quickly rebuilt. The walls have a peculiar slant to give them better protection from enemy artillery. Dating from the 16th Century, it has a star shaped layout and it is this characteristic that gave the name to the village of Stellata.
713 views