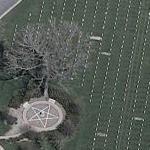 By kjfitz @ 2006-03-20 10:42:32
@ 41.51241, -90.527184
Rock Island, Illinois (IL), US
Rock Island National Cemetery was established within the confines of the U.S. Arsenal located on Rock Island in the Mississippi River near the cities of Davenport, Iowa, and Moline, Ill. In 1863 an area was set aside to bury Union soldiers who died while serving as guards at the large Confederate prison camp established on Rock Island by the U.S. government.

In 1868, the inspector of national cemeteries reported that the Rock Island cemetery contained 136 remains, including seven unknowns and six women and children. He described it as rectangle of 216 feet by 96 feet, enclosed with a “paling fence.” At the time, the arsenal’s commanding officer, General Thomas Rodman, indicated that the location of the burial area would ultimately conflict with his plans for extending arsenal-complex buildings. He recommended the remains of individuals currently interred at Rock Island be moved to the upper end of the island; the inspector of national cemeteries further suggested that Civil War decedents interred in Oakdale Cemetery in Davenport, Iowa, be removed to the new site on Rock Island, as well. Subsequent property transfers from the Rock Island Arsenal Reservation in 1926, 1936 and 1950 brought the national cemetery to its present 31.5 acres.

Today, Rock Island is the final resting place of soldiers who served in the Civil War, as well as the Mexican War, Indian Wars, Spanish-American War, World Wars I and II, Korea and Vietnam.
Links: www.cem.va.gov
1,200 views