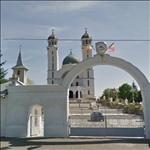 Nerva Florea from a village in the Apuseni Mountains was born in 1906. He graduated from the theology faculty of the University of Sibiu (1924–1927) and the law department of the University of Cluj (1932–1936). He was a teacher in the town Hunedoara and priest in Ghelari from March 1939. He had a revelation, while sitting on a park bench, that when he had graduated from Sibiu that he should build an impressive church. After the revelation of the entire building including precise architectural details


Arriving in Ghelari he began building in September 1939. He oversaw the whole building process, of which he had had the vision. He regarded himself only as the architect of the project. The church was founded on a hill in the center of the village near the ancient stone church. The were necessary 100 kg of dynamite to level the place, this one having been the edge of a stone hill. They laid the foundation of the church of September 1939. Due the great need of money, the people created in the fanfare of Ghelar (create at the end of the 19th century), made a tour of country at the big factories to collect the money for the building. The walls of the building were raised at three meters in 1945. Between 1945 and 1955 the workings must have been stooped due to the communist persecution that had as a victim the reverend nerve, too. That one had been arrested (but the hand-cuffs couldn’t be put on his hands because they couldn’t be closed) and jailed, but he was set free because he couldn’t have been uncharged. The working could have been resumed since 1955, so the church having been finished in 1973 and hallowed on 3 November.

The building was made of brick having the walls with a breadth over one meter, the architectonic style being the one of "Greek Cross". The architecture combines more style so that the experts can not, two on the front side with a 47 meters height, the most imposing one being that of the middle of the church, i.e. the cupola. The natives made many material sacrifice for the building of the church. The material were brought by the train to base of the hill where is situated the village of Ghelari and by there with an axon cart. Sometimes the people dragged the materials with the aid of an inclined plane, being transported again by the train through the mine drift, then with the cableway (especially built) almost near the church and then with a cart to the place of building, being the only way of communication with Hunedoara town (situated at 18 km). Afterwards a road that connects Ghelari to Hunedoara was built in 1958. The Painting having an area over 4000 meter is made of fresco in the style "bunon fresco". Every saint that was painted fronts the person who watches him. The iconostasis is gilded with gold and the icons too; this being used over 8 pounds of gold for this purpose. The painter of the church was Constantin Nitulescu and the achievement had lasted for seven years (1960–1967) in spite of having only five painters. The sculpture made of oakwood was achieved by the artist Ioan Cristea. At the beginning of 1980s the church began to crack because the ceiling of the laying under the church couldn't support the weight of the church any longer. There was the only one solution to stop the further deterioration of the church: the consolidation which was made immediately the reverend. First he strengthened the whole land by injecting cement in the present cracks, then by surrounding the church with a belt of ferro-concrete.

The reverend Nerva Florea died on 22 July 1990 being buried in the church. His death represented the end of many of the plans for the arrangement of the church. The consolidation on vertical line couldn’t be done because of the straitened circumstances and the reverend’s projects are unachievable nowadays because of the exaggerated price. His dream was to paint the exterior side of the church in mosaic, to surround it by seven artesian well and to make the monumental entrance of marble. The hope of the people of Ghelar is that the church will be as the one in the model from the museum of the church. The church was visited by a lot of people from all the world, people that were impressed by the marvelous church built by the "Preot Iconom Stavrofor Nerva Florea". The church is always opened for all those who want to visit it.
365 views