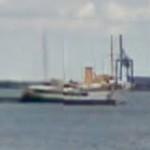 By Dania @ 2010-02-03 04:39:12
@ 55.683671, 12.602299
Copenhagen, Denmark (DK)
Her Danish Majesty's Yacht Dannebrog (A540) (Danish: KDM Dannebrog) was launched by Queen Alexandrine at Copenhagen in 1931, and commissioned on 26 May 1932. The yacht now serves as the official and private residence for HM The Queen of Denmark, HRH the Prince Consort, and members of the Royal Family when they are on official visits overseas and on summer cruises in Danish waters. When at sea, the Royal Yacht also participates in surveillance and sea-rescue services.

The Dannebrog, named after the flag of Denmark, was built in 1931–1932 at the Naval Dockyard in Copenhagen. She replaced the previous royal vessel, an 1879 paddle steamer, also called Dannebrog. The yacht has dual functions: it is primarily the Royal Yacht during peacetime; it can become a hospital ship during emergency alerts or war.

The ship’s hull is a riveted steel construction on transverse frames. The ship has a clipper stem and an elliptic stern. Viewed from the side, the ship may be divided into two sections. In front of the funnel there is space for the crew, any cargo, and the engine. At the rear is the Royal Apartment. This could accommodate patients if ever the yacht were used as a hospital. During visits to Danish and foreign ports the covered quarterdeck is used for receptions.
Links: en.wikipedia.org
610 views