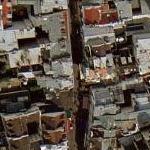 Rue Mouffetard is a street in the Ve arrondissement of Paris, France.

Situated in the Ve arrondissement of Paris, Rue Mouffetard is one of Paris's oldest and liveliest neighbourhoods. These days the area has many restaurants, shops, and cafés, and a regular open market.

The origins of this thoroughfare are ancient, dating back to Neolithic times. As with today's rue Galande, rue Lagrange, rue de la Montagne Sainte-Geneviève and rue Descartes, it was a Roman road running from the Roman Rive Gauche city south to Italy.

From the Middle Ages a church along this section of roadway became centre of a "bourg Saint-Médard" (Saint-Médard village), and from 1724 was integrated into Paris as the main artery of the "Faubourg Saint Médard".

The area remained relatively unchanged because of its location on the Saint Geneviève hill, which protected it from Baron Haussmann's redevelopment during the reign of Napoleon III.
Links: en.wikipedia.org
2,643 views