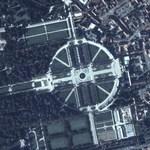 By DonMartini @ 2006-06-30 09:04:33
@ 49.383714, 8.568199
Schwetzingen, Germany (DE)
Schwetzingen Castle began as a simple aristocratic fishing retreat (much like Versailles which began as a hunting lodge) and had an eventful architectural history, in several phases of construction, especially during the reigns of the Electors Palatine Karl Philip (1716-1742) and Karl IV Theodor (1742-1799) who, as their answer to Versailles, embellished the castle gardens with some of the finest and most elaborate formal water parterres in Germany gardens.

As it evolved, the high central Baroque block of the Castle was extended to either side (from 1747 onwards) in matching curved ranges of glazed arcades that were punctuated by pavilions which followed the arc of the vast garden circle. They partly enclose the circle bisected by a wide gravel axis flanked by parterres which centers on a spring-fed water-basin inspired by the bassin of Diana at Versailles, but here expressing the more appropriately water-centered Greek myth of the poet Arion and the dolphins.

On the other side at the entrance, a mulberry-tree allée stretched from the centre of the Castle to the city of Heidelberg, 10km away on the horizon, truly a remarkable feat of autocratic landscaping.
Links: www.smart-travel-germany.com
861 views