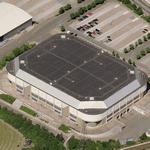 By adrbr @ 2008-03-10 12:02:15
@ 53.399711, -1.418734
Sheffield, United Kingdom (GB)
The Sheffield Arena is an arena in Sheffield, England. It is well known for hosting big name concerts and sporting events in Sheffield. It is situated near Rotherham, Sheffield City Centre, Attercliffe, Meadowhall and the Centertainment and is the premier concert venue for Yorkshire. It opened as the Sheffield Arena, was re-branded as the Hallam FM Arena, but has returned to its original name as of 1 November 2007.

Constructed at a cost of £34 million, it was opened by Queen Elizabeth II on May 30, 1991. The first concert took place that evening, Paul Simon playing as part of his "Born At The Right Time" tour. Around 7 million people have attended events at the arena since it opened. It has a maximum seated capacity of 12,500.
Links: www.sheffieldarena.co.uk
1,038 views