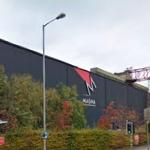 By kkeps @ 2010-08-17 19:07:00
@ 53.418515, -1.389887
Rotherham, United Kingdom (GB)
Magna Science Adventure Centre is an educational visitor attraction, primarily appealing to children. It is located in a disused steel mill in the Templeborough district of Rotherham, England. The site is formerly home to the Steel, Peech and Tozer steel works (also known as Steelos). In 50 AD it was the site of the Templeborough Roman fort.

The principal exhibits are divided into five pavilions, Earth, Air, Fire, Water and Power (The last one is very small). There is also a large outdoor play area and water play area.

The site, often used for staging events, conferences and gigs, won the Enjoy England Gold Award for Business Tourism in 2006 as well as many other awards for the high quality of product.

The Magna Science Adventure Centre won the 2001 RIBA Stirling Prize for its architects Wilkinson Eyre Architects, Mott MacDonald's and Buro Happold's innovative use of space in the old steelworks. Visitors are often as impressed by the building itself as the attractions contained within it.
Links: en.wikipedia.org
700 views