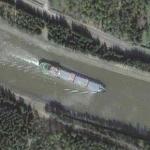 In the Moscow Peace Treaty (1940) the Karelian Isthmus along with the city of Vyborg was ceded to the Soviet Union, thus splitting the canal in half and ending all traffic.

A treaty in 1963 leased the canal area to Finland for 50 years. A new deeper canal was constructed and opened to traffic in 1968. The length of the canal itself is 42.9 km.

A system of inland waterways and canals in the 120 interconnected lakes of the south-central and south-east part of Finland are reached through the canal. The length of deep channels in lake Saimaa (with an authorised draught of 4.2m) is 814 km. Dimensions of the locks in the canal and waterways is length 85m, breadth 13.2m.

Negotiations to extend the lease time are presently going on between Finland and the Russian Federation (2005).
Links: portal.liikennevirasto.fi
717 views