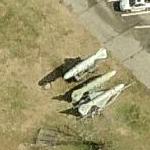 ...While it is not a particularly sophisticated missile when compared to newer generations of Anti-Ship missiles such as the French Exocet, the Silkworm's unusually large warhead ensures that a single hit will inflict very serious damage."
Links: en.wikipedia.org
868 views