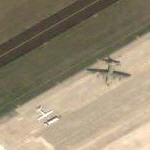 By kjfitz @ 2005-06-27 14:47:57
@ 40.880953, 14.290187
Naples, Italy (IT)
The Naval Support Activity located in Agnano was shaken by a sizable earthquake in August 1982. Damage resulted to the infrastructure of the base and despite the large amount of money spent on repairs, it was decided that the Navy community in Naples was in desperate need of new facilities. Project Pronto was planned to move all operational and support facilities out of Agnano to a 250 acre site near Capua, Italy. The project ended in 1988 when the US Congress concluded it was too expensive and when the Italian Ministry of Defense Purchase of site fell through. In 1990 the decision was made to locate and build the operational aspect of the community in Capodichino, site of the civilian airport which has shared its' runways with the US Navy for many years. Additionally, a support site which would consist of housing, schools and all aspects of community support would be built in the town of Gricignano, about 15 miles north of Capodichino.
Links: www.globalsecurity.org
8,294 views