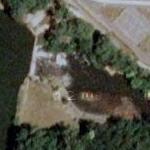 By kjfitz @ 2010-03-09 19:11:55
@ 43.602405, -89.768955
Lake Delton, Wisconsin (WI), US
On June 9, 2008, Lake Delton, the approximately 267-acre dammed artificial lake adjacent to the village, overflowed its banks washing away four homes and a portion of Old Newport Road (County Highway "A") while nearly emptying the lake basin into the Wisconsin River following several days of torrential rains. The overflow happened as local authorities ordered evacuations and sandbagging in a number of towns as rivers and lakes rose across the southern portion of the state.

Sandbagging of the dam (which remained intact) was begun overnight by about 100 people, but the contents of the lake began to pour into the river about mid-morning when the embankment over which the highway ran failed eventually opening a breach of several hundred feet. The lake, which averaged about 12 feet in depth, drained out over a period of a few hours.
Links: en.wikipedia.org
983 views

milwhcky
@ 2010-03-29 04:29:30
The dam did not fail. Several days of heavy rain caused the lake to overflow along the northern shore between the lake and the Wisconsin River. The land quickly eroded and created a channel which caused the lake to empty. I visited the site three weeks after it happened, and it was quite a shock to see the empty lake.
http://virtualglobetrotting.com/map/2008-06-09-lake-delton-empties/