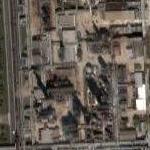 By kjfitz @ 2005-11-23 11:48:24
@ 48.119537, 17.180686
Bratislava, Slovakia (SK)
Slovnaft, a refinery and petrochemical complex, is one of the major refineries in Central Europe, with a processing capacity of 5 to 5.5 million tons of crude oil and other feed-stocks per year. Slovnaft is situated on the south-eastern outskirts of Bratislava - the capital of the Slovak Republic. It is spread on an area of approximately 520 hectares in the locality called Vlcie hrdlo.

The complex of production units EFPA with a total value of 526 M US$ is the most important investment project in the history of Slovnaft. The units transform heavy residue with high sulphur content to components of motor fuels and fuel oil with low sulphur content. The launch of the EFPA complex allows Slovnaft to produce (since December of 2000) Eurogasoline and Eurodiesel that meet requirements for the export to the countries of European Union.
Links: www.vurup.sk
1,427 views