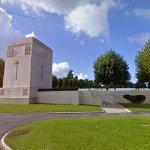 By WacoKidd110 @ 2012-08-04 07:37:40
@ 49.985578, 3.216484
Bony, France (FR)
Somme American Cemetery and Memorial in France is sited in the commune of Bony, on a gentle slope typical of the open, rolling Picardy countryside, in northern France. The 14.3-acre (58,000 m2) cemetery contains the graves of 1,844 of the United States' military dead from World War I. Most lost their lives while serving in American units attached to the British Army, or in operations near Cantigny. The headstones, set in regular rows, are separated into four plots by paths that intersect at the flagpole near the top of the slope. The longer axis leads to the chapel at the eastern end of the cemetery.
Links: www.abmc.gov, virtualglobetrotting.com, en.wikipedia.org
448 views