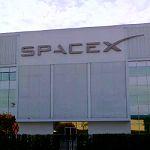 By Parabellum @ 2010-12-08 11:01:53
@ 33.920742, -118.326429
Hawthorne, California (CA), US
Space Exploration Technologies Corp. (SpaceX) is an American space transport company founded by PayPal co-founder Elon Musk. This innovative company focuses on making space travel accessible and hoping to usher the world into an era of convenient space travel. Perhaps building the infrastructure necessary for off world colonies, or simply a billionaires pet project, the success of the company remains to be seen. Though they have recently had major breakthroughs in reusable rocket technology. It has developed the Falcon 1 and Falcon 9 rockets, both of which are built with a goal of being reusable launch vehicles. These rockets have been tested successfully several times over.

SpaceX now holds a value of 33.3 billion dollars. Elon Musk is the majority shareholder with 54% of the company. This most recent figure puts SpaceX as worth more than Musk’s other well known company Tesla. Tesla was in the news recently when it announced a new ‘cybercar’ with a bold design that drew much criticism.

SpaceX is split between the headquarters in California and a launchpad near the Kenny Space Center. Here the company set out to develop a reusable rocket. Such tests and rocket development has become critical to the long-term health of the International Space Station.

Musk himself is a billionaire several times over with a net worth of $23.6 billion. The ambitious business magnate hopes to drive innovation and move the world into the economy of tomorrow, hoping to create a second industrial revolution. While his legacy remains to be determined, Musk is assured to be one of the most influential figures of the 21st century. Musk is perhaps one of the few business leaders with eyes to the future, who dreams of a world of tomorrow. And companies like SpaceX will help make that dream a reality.

Along with testing the two-stage Falcon 9 rocket, making only its second flight after a maiden launch in June, Space Exploration Technologies managers and engineers looked forward to automated maneuvers by the Dragon cargo craft before a guided re-entry and a parachute-assisted splashdown in the Pacific Ocean off the coast of Mexico.