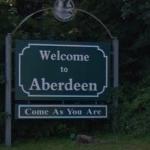 The sign was installed in 2005 due to the efforts of the Kurt Cobain Memorial Park project and was the city’s first official recognition of Cobain. A full park, known as Kurt Cobain Landing, was adopted by the city in 2015. The park resides on the Wishkah River near Young Street Bridge, which was the inspiration for Cobain’s song “Something in the Way”. A small collection of sculptures and a headstone memorialize the singer/songwriter, who died by suicide in 1994.

Cobain formed Nirvana in 1987 along with bassist Krist Novoselic. The band’s first album Bleach was released in 1989. Drummer Dave Grohl then joined the band and they released Nevermind, which was an enormous success and introduced the world to their “grunge” style of music. They released their third and final LP, In Utero, in 1993. Including compilations and live records, Nirvana has sold over 75 million albums worldwide.

The city of Aberdeen is named after Aberdeen, Scotland due to its geographic similarities. It is a fishing, timber, and tourism town that is known as “The Gateway to the Olympic Peninsula”. The population is estimated to be about 17,000. Other musicians from Aberdeen include Patrick Simmons of the Doobie Brothers and Cobain’s friends Dale Crover and Matt Lukin of The Melvins.
Links: www.kurtcobainmemorial.org
61,645 views