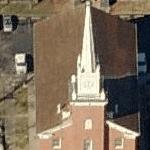 By kkeps @ 2008-11-04 10:35:31
@ 37.107828, -113.583973
St George, Utah (UT), US
"Less than a year after St. George was settled, residents were directed by Brigham Young to "build a building as soon as possible which would be commodious, substantial and well furnished with a seating capacity of 2,000." The building, he said, should be a "ornament" to the city and a credit to its people's "energy and enterprise." The result is the handsome and graceful red sandstone building one block south of here known as the St. George Tabernacle. The cornerstones of the Tabernacle were set in June of 1863. Parts of the structure were completed and the first meeting was held in the basement in March of 1869, but the building was not fully completed and dedicated until May of 1876. During those 13 long years of construction the workers, most of whom had not yet built suitable homes for themselves, received foodstuff as compensation. The limestone for the three-foot thick basement walls was hand-quarried from the foothills north of the city. Red sandstone boulders for the two-and-one-half foot walls were hand-quarried from a site near the Red Hills Golf Course and then hand-cut into serviceable stones. The markings of the individual stone masons' tools are still evident upon close inspection. The building's wonderful interior plaster and woodwork illustrate the pride and dedication to excellence that existed among the founders of Dixie. Currency was hard to come by in the hardscrabble lives of the settlers. Raising cash for such items as the building's 2,244 panes of glass required great sacrifice. The Tabernacle's bell was cast in Troy, New York in 1872 and the clock was made in London. Both were shipped to California, then hauled by team and wagon to St. George. The Tabernacle, considered to be one of the most architecturally beautiful buildings in the West was and continues to be a "ornament" to the city. The fact that it was completed at the same time as the Temple and courthouse were under construction is certainly a tribute to the "energy and enterprise" of Dixie's pioneers."
Links: www.waymarking.com
865 views