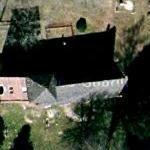 By kjfitz @ 2010-02-04 13:54:08
@ 36.940575, -76.585435
Smithfield, Virginia (VA), US
St. Luke's Church, also known as Benns Church, Old Brick Church, or Newport Parish Church is an historic church located in the unincorporated community of Benns Church, near Smithfield in Isle of Wight County, Virginia. It was known variously as the Old Brick Church or the Newport Parish Church long before being given its present name in 1820. It is allegedly the oldest surviving church in one of the original thirteen states that became part of the United States. It is the oldest existing church of English foundation in America and is unusual for the Gothic elements of its architecture. St. Luke's Church is estimated to date to 1632 or 1682. On October 15, 1966, St. Luke's was designated a National Historic Landmark and was listed on the National Register of Historic Places in recognition of its historic and architectural distinction.
Links: en.wikipedia.org
668 views