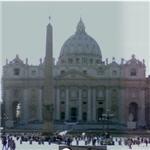 By kjfitz @ 2008-10-29 18:30:56
@ 41.902366, 12.458378
Vatican City, Holy See (Vatican City State) (VA)
The Basilica of Saint Peter, officially known in Italian as the Basilica di San Pietro in Vaticano and commonly known as St. Peter's Basilica, is located within the Vatican City. It occupies a "unique position" as one of the holiest sites and as "the greatest of all churches of Christendom". In Catholic tradition, it is the burial site of its namesake Saint Peter, who was one of the twelve apostles of Jesus and, according to tradition, was the first Bishop of Antioch, and later first Bishop of Rome and therefore first in the line of the papal succession. While St. Peter's is the most famous of Rome's many churches, it is not the first in rank, an honour held by the Pope's cathedral church, the Basilica of St. John Lateran.
Links: en.wikipedia.org, virtualglobetrotting.com
1,867 views