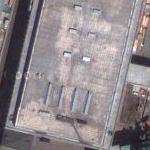 The building was built at the initiative of Nikita Khrushchev as a modern arena for Communist Party meetings. Although the architecture of the projected building contrasted sharply with the historic milieu, building work started in 1959. The structure was opened along with the 22nd Congress of the Communist Party of the Soviet Union on October 17, 1961. In 1962 the architects of the project, headed by M.Posokhin were awarded the Lenin Prize for their work.
Links: en.wikipedia.org
574 views