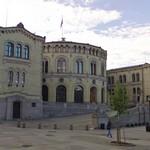 By Dania @ 2010-02-09 10:23:34
@ 59.913627, 10.739429
Oslo, Norway (NO)
The Storting is the supreme legislature of Norway, located in Oslo. The unicameral parliament has 169 members, and is elected every four years based on party-list proportional representation in nineteen plural member constituencies. The assembly is led by a presidium of a president and five vice presidents; since 2009 Dag Terje Andersen has been president. The members are allocated to twelve standing committees, as well as four procedural committees. Almost all public agencies of Norway are subordinate the government, but three ombudsmen, the Parliamentary Intelligence Oversight Committee and the Office of the Auditor General are directly subordinate parliament.
Links: en.wikipedia.org
541 views