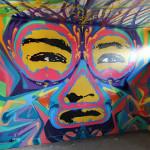 'La Tour Paris 13' was a multi story abandoned building that became a canvass for some of the most well known street artist from around the world. It was an exhibition of work of over 100 artist. It was open to the public in October 2013, shortly before it was demolished
Links: www.stink.tk, www.huffpost.com, untappedcities.com
299 views