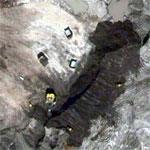 "In a move that will make it the country’s largest oil sands producer, Suncor Energy said it would spend 20.6 billion Canadian dollars (about the same in American dollars) to expand operations near Fort McMurray, Alberta. The operation will be able to produce 550,000 barrels of oil a day when completed in 2012. The chief executive of Suncor, Richard L. George, said that with the new project, the company expects to generate a 15 percent return on investment at an oil price of $60 a barrel. The expansion will also allow Suncor to use an underground steam heating process rather than open-pit mining for about half of its tar sands oil production, which will reduce the effect on the environment."
Links: en.wikipedia.org
1,171 views