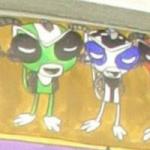 By kjfitz @ 2012-12-01 11:16:58
@ 40.636932, -74.07674
New York, New York (NY), US
Super Robot Monkey Team Hyperforce Go! (commonly known by its initialism, SRMTHFG) is an American/Japanese anime television series, and was created by Ciro Nieli, one of the directors of Teen Titans, with animation being done by a Japanese studio known as The Answer Studio (whom would later work on the Cartoon Network original series Transformers: Animated). Set mainly on the fictional planet of Shuggazoom, the series follows the adventures of five cyborg monkeys and a human boy named Chiro as they struggle to protect their planet - and the rest of the universe - from the forces of evil.
Links: en.wikipedia.org
633 views